While we're waiting for the book to officially launch, here's another interview to whet your appetite.

Today's interview is with science teacher and punk philosopher, James Stewart. He claims to be "nobody special." He is a San Francisco area educator with his primary goal being teaching his students to think for themselves. You can read his essay, "On Conformity" in the upcoming anthology, Punk Rock Save My Ass, from Medusa's Muse Press, launching very soon!

How do you personally define punk?

I don’t define Punk, it defines me... Bwahahahah! But seriously, I think of it as a way of looking at life and the world around you with a critical eye and not believing every bullshit-slinging huckster trying to sell you on an idea. It means “Think for yourself.” It means not being afraid to stand apart from the crowd, to dress differently from the sheep or to have a bonafide opinion.

What is NOT punk?

Doing or saying ANYTHING because you think it makes you punk. Fuck what other people think, be yourself. Stand apart from the herd. Let the sheep be sheep.

What punk song/band changed your life, and how?

Sure, I’d like to say that the first time I threw Jealous Again on the turntable it was as if a veil was lifted from my eyes and I saw the world for the first time, but the truth is I had it on the wrong speed and it kinda sounded like a garage-band version of Black Sabbath. (In my defense, it didn’t say it was 45 rpm anywhere on the damned thing!) The truth is every punk band I have ever heard has changed my life in one way or another. There are far too many songs that have made an impression on me to list.

But I sense what you're fishing for here is an early experience that set me on the path to punkness... I remember staying up late to watch Saturday Night Live as a kid (’78/’79 maybe?) and being totally amazed and inspired by DEVO. It was just so weird and SO right. I made my mom buy the Are We Not Men? record for me. I must have listened to that record non-stop for a month straight, full volume as I danced around the room in my underwear and sunglasses, acting like an idiot. I’m surprised she didn’t have me committed. That was probably the moment I knew that Lynard Skynard just were’t gonna cut it anymore.

What has punk taught you about yourself and your life?

That I can think for myself and I don’t have to choke down the bullshit that the talking heads on TV spoon feed the masses. I don’t need heroes and I don’t wanna be nobody’s hero either.

What surprised you about the punk scene?

I was drawn to punk because it was different and I thought it would be accepting of different ideas but in reality it had it’s own dogma just like every other belief system. And that dogma was narrow in scope and very slow to change.

If a person is interested in learning more about punk/DIY, what would you suggest they do?

Stop asking irrelevant old men about a movement that died 20 years ago and read a book. Then go out and start your own movement, truly Do-It-Yourself and stop waiting around for people to tell you it’s okay. Hell, start a new fashion trend by wearing rainbow leg-warmers on your arms and underwear on your head. It’d be a hell of a lot better than heading to Hot Topic and buying a Punk™ outfit and dying your hair blue. Think. For. Yourself.
Posted by Rena at 7:24 PM 1 comment:

Malcolm Mclaren didn’t invent Punk.
New anthology, Punk Rock Saved My Ass, shares the true stories of people positively transformed by punk rock.
Contact Terena Scott at Medusa’s Muse Press for more information: medusasmuse@gmail.com
Punk Rock Saved my Ass, an anthology of true, transformative punk rock tales, launches April 30th, 2010 from Medusa’s Muse, an indie book publishing company located in Northern California, USA. Edited by Terena Scott and Jane Mackay, the 146 page anthology is a world-wide collaboration of authors influenced by the cultural storm called "punk rock". For some it was a shelter from youthful angst, an artistic outlet, or a way to rage, but all agree that it changed their lives forever. The writers are everyday people of all ages, men and women, with diverse political and cultural backgrounds: libertarians, socialists, bakers, computer geeks, nurses, performance artists, poets, writers, musicians, teachers, and parents, from the United States and Europe. One dollar of every book sold will support the 924 Gilman Street Project in Berkeley, California.
“I wanted to create a book that would show the positive side of punk,” says Terena Scott, editor and publisher of Punk Rock Saved my Ass. “I was tired of all the sensational, self destructive stories about punks. Punk is a passionate, creative, outrageous energy and if you channel it you can create and achieve amazing things. I knew there had to be people out there whose lives had been positively changed by the punk movement and I wanted to talk to them. So I decided to publish an anthology.”
She insists the book is not a romantic manifesto about the glory of punk. “There’s definitely a dark side. People get hurt, and there is a lot a drug use. But that isn’t the whole story, and I wanted to show the bigger picture of what punk is about.” She laughs. “One of the writers states in his essay that he hates books like this; they perpetuate the myth that punk is inclusive and understanding. There can be prejudice in punk, the whole “us vs. them” thing, and you’ll read that in some of the stories. But that’s why this book is different; these essays are written by real people with their own perspective and biases. Every story comes straight from the heart, and when Jane and I edited each story we made sure the writer’s unique voice and honesty remained.”
The writers include musician and libertarian Michael W. Dean, UK poets Tony Walsh and Annie Mcgann; Boston musicians Chestnut Growler and Squallie Greenthumb; performer Jennifer Blowdryer; writers Ryan Cooper, Mic Schenk, Jim Munroe, Matthue Roth, and Heather Seggel; musician Paul Richards of the band Heavy Load; and many more. Also included are several never before published photographs of punks and punk bands taken by Nicole Lucas and Richard Wismar.
Punk Rock Saved My Ass, distributed by Ingram, is $10.00 and will be available from Amazon.com, Powell’s Books, BarnesandNoble.com, and your local bookstore. 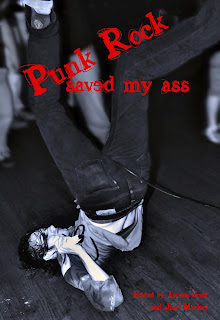 Finally, we have an official date of book launch: April 30th, of this year. Very soon now, I will send the file to the printer and then I will have several boxes of lovely, fresh, spanking new books to share and sell.

How do you personally define punk?
I don't. I do go camping with Edward Tudor Pole every year though, does that count?
What is NOT punk?
These questions are not punk.
What punk song/band changed your life, and how?
We didn't seriously listen to punk bands because we were punk bands. Well, we liked The Clash but mostly we listened to reggae - then American music - Iggy, Talking Heads and Patti Smith. Fame was completely despised. No stars. No celebrities. I liked Iggy Pop and Prince Fari best. And the Slits. We often stole or borrowed their boyfriends. No punk somg or band changed my life though. Punk wasn't something you consumed. You couldn't go out and buy it. That was the point! Now kids can just go to the mall and buy their youth cult of choice off the shelf. (Did you see that episode of South Park where the Goths get pissed off with the new Vampire kids and burn the shop down?)  I heard God Save the Queen when I was 18 in 1977 and it seemed really fast but we thought the lyrics were amusing. My favourite song of theirs was Bodies but that was because Lydon's lyrics were so comical. We weren't anarchist either - that was a pose - Lydon said he was because it fitted in with his persona and rhyme scheme. We were political, anti right wing -  anti fascist - Thatcher got in on my 21st birthday. That makes you politically active.  I went out with a guy who was in Derek Jarman's film Jubiilee - I am still close friends with the guy now. I suppose he introduced me to 'punk' but mostly he was into Hank Williams (LOL Sorry. He'd hate me calling him a guy too. LOL).  He caused havoc in a restaurant we were in the other day because the young waiter kept calling us 'guys'. Once a punk always a punk.
What has punk taught you about yourself and your life?
I am still close to my old contingent and we are growing old together. We've all been meeting up lately because we've all been turning 50. Most of them are still in bands. Now and then one of us dies but considering how much drugs we took we are all rather well. Punk isn't something I could isolate from the rest of my life. Punk isn't an outside thing. You either is or you isn't. We did feel superior in our way but then I think all young people do don't they. Every generation thinks they invented sex and drugs and music. We didn't think we invented it because we were following in the footsteps of the mods and the flappers :-)  I was based in central London though - if you were a kid in the countryside I suppose it would be different.  I left the west end in the end because the squats got taken over by fascist skinheads and they cramped everyone's lifestyle. Personally I was sick of drugs and the constant threat of violence so I got out.
What surprised you about the punk scene?
The first punks I saw were in Birmingham in the foyer of the theatre I worked in. It wss 1977. They had come to see Bob Marley play in a small hall next door. I was surprised at how they got their hair to stick up and quizzed them. They used the blocks of goo that they made coca cola out of in bars. It was before hair gel. Hair spray wasn't strong enough. Some people used liquid soap. It was a disaster if it rained :-)
If a person is interested in learning more about punk/DIY, what would you suggest they do?
Try and be born before 1963 or buy me a drink and I'll tell you my embarressing Joe Strummer story.
Posted by Rena at 7:35 PM 1 comment:

Patsy Rodenburg: Why I do theater | Video on TED.com

This is outside the Punk anthology thread, but it made such a strong impact on me I wanted to share it with you. She states that society needs play wrights and actors now more than ever, because they are able to be "present" when most of us have lost the ability to do so. We need them to tell the truth.

I need to finish my play.

Patsy Rodenburg: Why I do theater | Video on TED.com
Posted by Rena at 6:21 PM No comments: 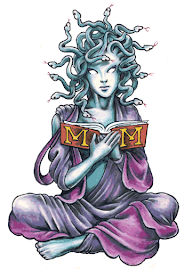 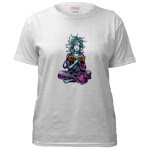